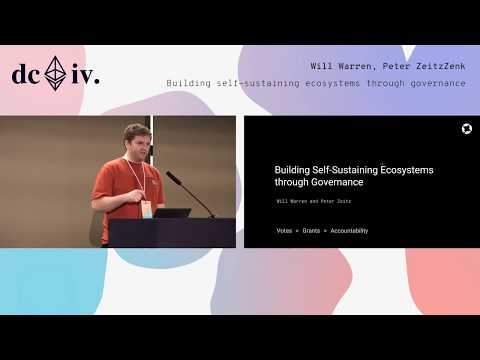 At 0x, we would like to move towards progressive decentralization of network ownership and control. As a first step, we will launch a community-managed developer grant program that is intended to provide funding for public interest projects that advance the community’s collective interest and that drive platform growth. To take this one step further, we are developing a roadmap for transferring control of grant distribution and custody of grant funds to an on-chain decentralized governance system administered by the ZRX token holders themselves. The grant program will provide us with a unique opportunity to observe on-chain governance and community social dynamics when the financial stakes are real and no centralized authorities can interfere with the community's decisions. 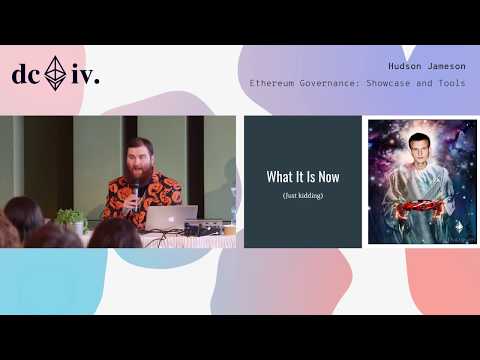 Governance is hard, especially in a blockchain community. This breakout session aims to educate participants on the history, major groups, and interactive tools around Ethereum governance. We will have representation from major governance bodies such as the Fellowship of Ethereum Magicians, EIP editors, and core developers. The activities in the breakout session will include short presentations from each governance group, a Q&A session, and demos of software and tools used in the governance process, such as exciting new voting/signaling tools. 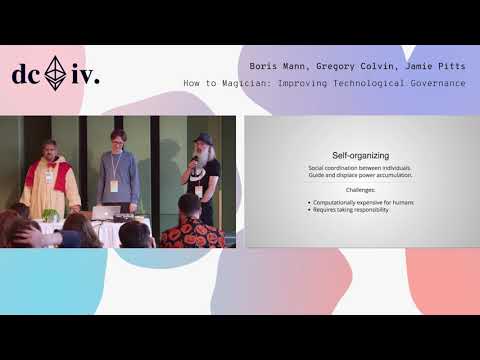 How to Magician: Improving Technological Governance

The Fellowship of Ethereum Magicians is a self selecting group of people that collaborate to get to rough consensus and running code that improves the technology ecosystem of Ethereum and related decentralized & cryptographic technologies. We'll discuss what the EthMagicians have done to date, how anyone can join and contribute, and how to self-organize to reach consensus  and commitment on subsequent action. 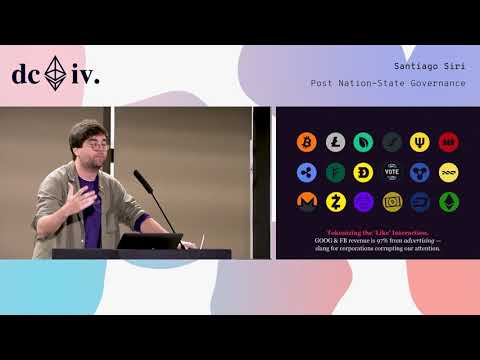 The contemporaneous world order we have today emerged during the Westphalia Treaties of the 17th century after 30 years of war in Europe following a clear set of principles: frontiers, non-domestic intervention and power alliances that keep the peace through a Nash equilibrium. As the internet and blockchains become a dominant economic force able to break the limits imposed by Nation-States (ie: "Facebook and the Russians"), the quest to seek a new equilibrium of power has begun. Democracy Earth researches smart contracts able to deliver an alternative to traditional democracy using the Ethereum network addressing key issues of voting systems including coercion and bribe resistance. 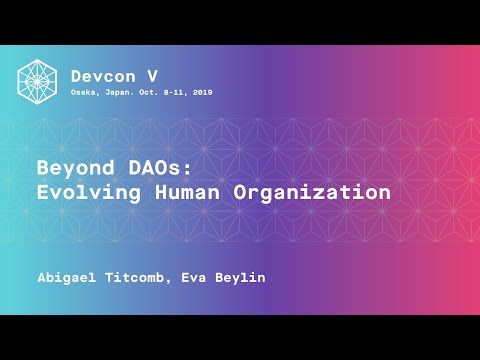 The hegemonic approach to human coordination (i.e. nation states, corporations) is being challenged as those underserved and disempowered by the current system search for more open, adaptable, and representative solutions. With the emergence of DAOs, decentralized governance, and token economics, we now have a new design space to engineer incentives and mechanisms that align human behavior. Projects like Aragon, DAOstack, Fairmint, Gnosis, Gitcoin, Commons Stack, and MolochDAO are all building, experimenting, and testing new ways to fund and govern human organizations. We want to build organizations that encourage sustainability over profit, stimulate regeneration instead of scarcity, and eliminate stakeholder misalignment seen in current cooperative models. To truly impact those outside the Ethereum ecosystem, we should be strategically aligning experimentation around counter-hegemonic goals and visions. Only then will we be able to move 'beyond DAOs' into an evolved future of regenerative, sustainable, and cooperative human organization. This workshop aims to: -Spark discourse and discussion on what future we're ACTUALLY building towards - Get those experimenting with new organizational models in the same room to discuss collaborative strategy, insights, and roadmaps - Workshop common frameworks and visions for new organizational models to eliminate project silos, form counter-hegemonic strategies, and move the whole ecosystem forwards. 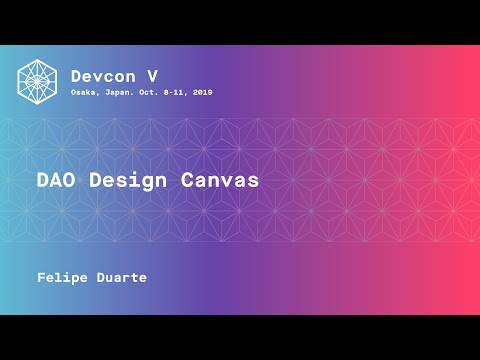 One of the most interesting innovations to come out of the cocreation in the Genesis Alpha DAO (DAOStack's first DAO) - The DAO Design Canvas Workshop utilizes a canvas-like tool developed by me to guide groups through the process of making the most vital decisions they face in the process of designing a DAO, soft and hard governance, on and off chain, no matter what platform. The process of exploring the purpose of groups with the canvas yields well defined use cases, powerful educational experiences and high quality dialogue that often leads into action. DAO Design Canvas has been used in all 5 continents and has been used to design the CuraDAO, the dHack DAOs amongst others. 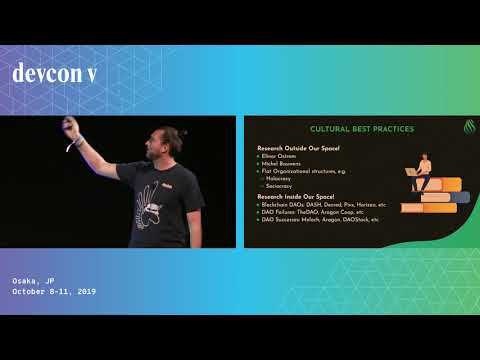 Realigning Incentives for Nonprofits with Ethereum

The Nonprofit space is a victim of our incomplete economic model. Our current economy does a great job at assigning value to individual wants and needs, but shared resources (infrastructure, the environment, public goods, etc) and taking care of the less fortunate members in our society are not assigned any value at all. Instead, when entrepreneurs do value calculations (profit projections) they are incentivized to extract everything they can from "externalities" because that improves the numbers on their spreadsheet. This is an impossible battle to win for the nonprofit world. Nonprofits will not out-compete for-profit companies when the economic model is working against them. We need to build new economic models around causes, so that we can actually attribute value to these "externalities" appropriately. I will introduce the various tools we have in the Ethereum space: Harberger Tax, Token Bonding Curves, DAO Governance Models, Escrows, Traceable donations, etc and how they can be used to build parallel economic models to fill the gaps in the current system. We have the tools to design, simulate, test and iterate solutions that can level the playing field for nonprofits! Let's get to work! 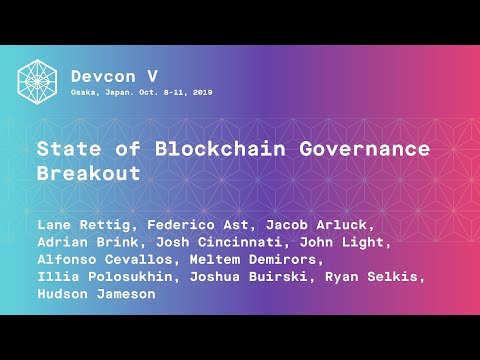 Governance is a hot topic in Ethereum and other blockchain communities in 2019, and for good reason. Blockchain tech continues to evolve rapidly, but our "social infrastructure" lags and major blockchain communities including Ethereum haven't invested nearly as much in building robust, socially scalable governance as they have in scalable tech. This governance-focused breakout session will invite core stakeholders from major blockchain platforms, including Ethereum, Tezos, Cosmos, Polkadot, Near Protocol, Zcash, Decred, and Spacemesh to present in turn the good, the bad, and the ugly of governance in their ecosystem. It will include talks from academics in fields including economics, political science and philosophy, legal theory, philosophy, and ethics, putting the blockchain governance landscape in the context of the overall evolution of human governance systems since democracy was born in Athens. It will introduce participants to essential governance concepts and challenges such as DAOs, on- and off-chain governance, voting, identity, formal vs. informal governance, governing the commons, and aggregating preferences. The breakout session will include a hands-on "challenge" section where participants need to self-organize and race to solve governance challenges in a decentralized fashion, to appreciate how hard the problem is. 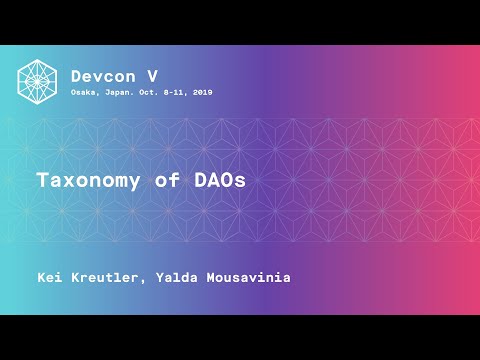 The term DAO appears here to stay. From its first use, the phrase Decentralization Autonomous Organization conjured an array of potentialities, including legal representation and management for natural systems to imaginaries of independent Skynet-like entities. However, despite the resurgence of DAO projects in 2019, we still lack a common vocabulary for different types of DAOs. From “human-work DAOs” to “superscalable” organizations, this breakout session aims to develop a working taxonomy of DAO projects with differing structures and objectives. We will provide a worksheet for participants to evaluate a specific DAO project instance, based on its decision-making processes, ease of entrance and exit, and broader governance mechanisms, with helpers from each project on hand to provide insight. We will also provide basis for existing organizational forms, such as co-operatives and mutual organizations, that DAOs both mimic and exceed. This breakout session seeks to establish a working group on DAO taxonomy, and chart both existing categories as well as the as yet unknown feats of DAOs. 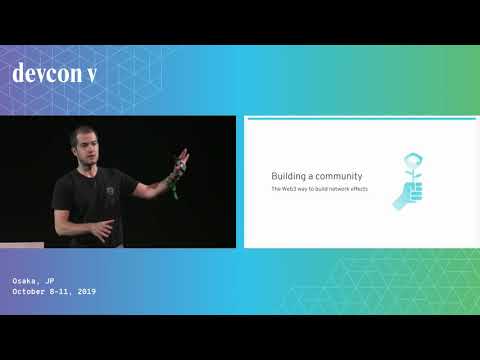